At the University of Chicago center in New Delhi ,an effort to save the Yamuna came as a pleasant invite to me .It was rightly termed ‘Revitalising the Yamuna ‘.

The show exhibited photos of the Yamuna in its various forms – as a means of habitat ,livelihood ,statistics and so on ! Ambedkar university ,Ashoka university,Young India   Fellowship,Water to Cloud and Tata centre for development collaborated with UChicago Delhi for this venture .The theme was to understand the socio-economic impact and give multiple perceptions of the river .

The films were articulate . Missing were  the voices of people in the audience who had no questions on where the crores of rupees were used in the last 20 years on the 3 phase Yamuna action plan !  How the 1376 km long river has shrunk to a mere 180 km ? Not able to resist the information with people, I shared how construction of hydroelectric projects ,sand mining ,stone crushing was polluting the river more than ever .

When 50 tribes migrate to the banks of Ganga deserting the pious Yamuna, 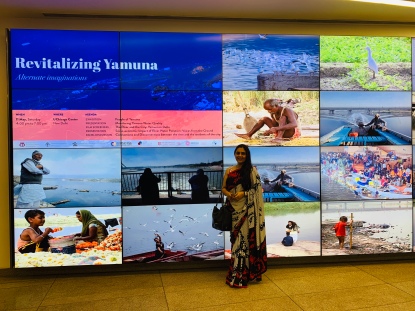 its time to sit up and think ,to question and act wisely .

The Topics I work on